Lynn is the 5th oldest colonial settlement in the Commonwealth. It was settled by colonists from the New England Company in Salem in 1629.

The land, named Saugus, was divided into 5 seperate communities. I n 1637 they named their community Lynn. It became a city in 1850.

Leather tanning became a major industry very early on encouraging growth in the shoe industry and a factory district was created as well as shoe workers' neighborhoods of boardinghouses.

While Lynn developed its industrial capacity, summer estates were being built along its shore establishing the city as a resort area.

Lynn was long referred to as the "City of Sin", owing to its historical reputation for crime and vice but it was also the City of Firsts.

1629:The first Tannery in the US began operations in Lynn.

1847:Lynn Astronomer Maria Mitchell was the first woman inducted into the Academy of Arts and Sciences.

1875:Lydia Pinkham, a Lynn resident, was the first woman to use her image to sell a product. The Lydia Pinkham Vegetable Compound.

1888:The first Electric Trolley in the state ran from Lynn.

1912:The first Airmail Delivery in New England flew from Saugus to Lynn

1942:The first Jet Airplane Engine in the U.S. was built at Lynn’s General Electric plant in.

Lynn is the largest city in Essex County with a population of approximately 89,000 it occupies about 13.53 sq mi and there are several neighborhoods contained within the Central, West Lynn, and East Lynn areas. 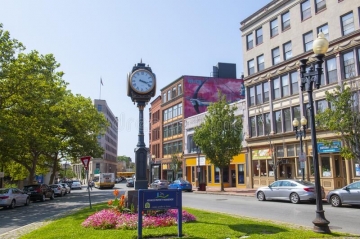